Fans are very important in computers; they are used to cool the CPU, GPU and sometimes the hard drive also. I used to think they cool the devices by blowing the heat away, in reality, they move air at fast speed toward the devices. The propeller ranges in sizes, the greater the size, the more air it displaces but more noise is made. My CPU fan is 120mm and my GPU fan is 90mm.

The 3 pin fans’ pins have the following use:

The 4 pin fans’s wires have 2 color sets while the MOLEX connector only provide power therefore the fans rotate at maximum speed. 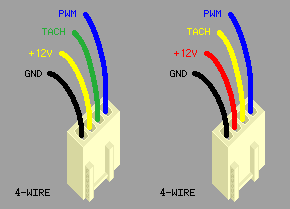 The tachometer reports the number of revolutions per minute. In a PWM fan, the fan is constantly supplied with 12V and the PWM wire is is used to adjust the fan speed. However in a 3 pin fan, the fan speed is changed by changing the voltage.

Fans tend to be noisy sometimes. You can try to clean the fan and the heatsink allowing the fan to rotate at a slower speed or use a fan controller to manually control the fan speed.

I bought the fan controller “Thermaltake Commander F5” to control my chasis fan and an old CPU fan which I use as a regular fan during summer. The fan controller was MUR 800 and it can control up to 5 fans. The fan speed of connected fans can be changed by a slider.