We all know about Humble Bundle which provides bundles of digital contents or video games at any price with additional contents if the amount is above average. A great percentage of the total amount is donated to Organisations.

Humble Bundle became very popular with Humble Origin Bundle in August 2013 which was the most successful bundle to date raising more than $7 million. That bundle included Dead Space, Burnout Paradise, Mirror’s Edge, Crysis 2, Dead Space 3 and for those who paid above average also got Medal of Honor(2010), Battlefield 3, The Sims 3 Starter Pack, Command & Conquer: Red Alert 3 -Uprising and Populous. 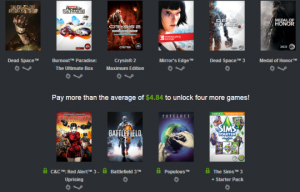 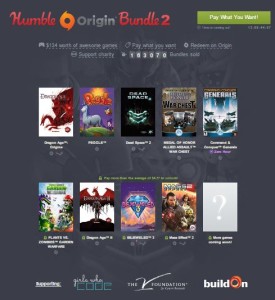 In my opinion, this bundle won’t be as successful as the first one since it lacks popular recent video games. It could have included one of these games Battlefield 4, Mass Effect 3, Crysis 3  or Need for Speed: Most Wanted. Dragon Age: Origins, Peggle and Bejeweled 3 should not have been part of this bundle since they were on the house in Origin during the past months. Anyway, it is quite a good bundle and more games are to be added next week.