Intel Corp is expected to release a new lineup of desktop processors(sixth generation of Core CPUs) this Wednesday, 5th August 2015 at Gamescom. The architecture of these processors is codenamed “Skylake”.

Skylake is the first commercially available processors that will use a 14nm lithography technology. Intel considers Skylake to be the most significant architecture in this decade as it brings  much more efficiency, it has also been the most difficult to develop.
Due to a delay to Broadwell(Previous architecture), Skylake was expected to be delayed as well to 2016 but Intel got it back on track for a Q3 release. This shows very well that Moore’s Law continues.

Skylake will comprise an integrated GPU; the Intel HD or Iris Graphics. The Iris graphics can have up to 72 execution units to compete with dedicated graphic cards from Nvidia and AMD. The Iris graphics will also have native support for DirectX 12.

DirectX 12 is a new low level graphics API similar to Mantle(released by AMD in 2013) . DirectX 12 has been developed by Microsoft for use in Windows 10 devices and Xbox One. DirextX 12 performance is 10 times that of DirectX 11 in 3Dmark test. DirectX 12 will also allow GPUs from different manufacturers to work together. With Intel Iris being a much powerful iGPU, it can be run in parallel with a dedicated GPU.

Skylake will also support both DDR3 and DDR4 ram with up to an amazing 64GB of ram(if DDR4 is used). It will also add a few additional instruction sets.

The box designs and MSRP pricing of the new CPUs were leaked earlier today. The pricing is actually lower than that of Broadwell at launch. 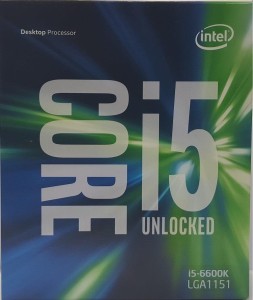 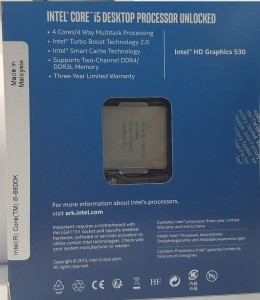 It is expected that Skylake will bring 25% increment in performance from Broadwell. I personally find Skylake appropriate for my next upgrade. I currently use a Core i3 2120, the Core i5 6500 would be perfect.