How is that possible?
The size of transistors found in modern microprocessors varies from 32 to 22nm. Gordon Moore, Intel Corporation’s Co-Founder stated that every 18 months, the size of a transistor will decrease by 2. This statement is actually known as Moore’s law. According to scientists and engineers, this law is coming to its end in 20-25 years; the performance of computers will remain static. We can’t miniaturize the size of transistor further below 1nm (size of an atom) because of Quantum effects;electrons are wave-like particles; they vibrate and diffracts. The quantum effects were negligible but at this level it is not.

Solutions for the continuation of Computing
1) Quantum Computing 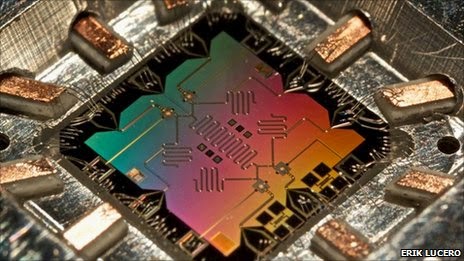 Seems like nothing is impossible to man. The most known solution is the Quantum
Computing. Recently, Microsoft explained Quantum Computing.
According to Edward Snowden’s leaked documents, the government of the United States is investing $79.7 million in the development of a Quantum Computer. Quantum Computers are really good at encrypting and decoding information. It can look through a database in a fraction of second. Quantum Computers make of Qubit instead of bits(1s and 0s). A Qubit can be a 1 or a 0 or both(use of superpositions). Quantum computers will not be at its full potential with current algorithms, algorithms needs to be rewritten which are a very time consuming process.
2) DNA Computing

The other solution is the DNA computing where DNAs are used to store information. The idea of DNA Computing came from Leonard Adleman in 1994. In 2013, scientists created a transcriptor(a biological transistor). Scientist used the DNA computer to store Martin Luther King’s speech, “I Have a Dream”. When the speech was retrieved, it was 99.9% the same as the original. According to Weizmann Institute of Science, one pound of DNA is enough to create a computer which is 100 times more powerful than the most powerful supercomputer that exist today. DNA computing however is just like silicon-based computers.

One thought on “The Future of Computing”